A Response to "The Future of the Azawakh in America," by Dr. Werner Röder

I share your scepticism as to the future of the Azawakh race in the Western World after its emancipation from the status of a "rare breed" towards an eye-catcher at Kennel Club events and the attraction for pet fanciers motivated by curiosity, vanity and commercial interests without serious cynologic competence and intellectual and/or emotional capacity to understand the heritage of one of the last remnants of originals dogs. This is a quasi dialectical problem: A much larger substructure of owners and breeders is needed as a basis for survival. On the other hand, popularisation opens the way for the eventual destruction of an original canine breed as executed by Anglo-European "Dogdom"-organizations since the second half of the 19th century. It’s worth trying to keep this developement under some control, hoping for an effect of educational activities. This does not only pertain to the field of genetics, but also - as Tinalhinan is pointing out - to behavioural questions in the context of our social systems.

Over here we can observe a growing belief among breeders, owners and – worst of all – among judges and thus among the general public, that Azawakhs are "untouchable" due to their very nature, and sociable specimens are untypical for the breed. It might be still hypothetical to assume that the „social incompetence“ spreading among European Azawakhs lines is a part of inbreeding depression. However, tantrums of panic or/and aggression of Azawakhs seem to become quite normal again in the exposition rings after a positive intermezzo with new imports and their offsprings during the Nineties and after. An over-all tolerance of sociopathic demeanour of Azawakhs from the side of the judges, eventually accompanied by prices, will serve as a further incitation of breeding policies without considerations for behavioural qualities and of those owners who are unable or unwilling to communicate with Azawakhs along the lines of their natural traits of character. The other (and eventually especially American) side of the coin is the demand for dogs as comfortable pastime accessories with a simplified reservoir of social reactions. This is a likewise precarious misunderstanding in respect to aboriginal dogs.

These days I looked at the archive material of our expedition to Burkina and Mali in 2000. The film (camera: Dr.Lutz Vollweiler)had the purpose to document colors, markings and phenotypical variations of Azawakhs and their natural environment. There is also a rather comprehensive demonstration of behavioural patterns of Azawakhs towards their masters, families and visitors of their camps. In the latter case, reactions range from individual distance limitations and different degrees of watchfulness to very close contacts. In neither case aggressiveness or panicky reactions have been observed. The basic confidence of the dogs towards their people is obvious, regardless of a sometimes rough handling. They are fitted for a reasonable adaption to the requirements of Western living conditions under intelligent guidance – by people who know and certainly not by "Everyone". 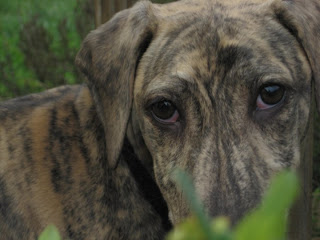 What is the future of the Azawakh in America?

Up until now, the Azawakh has remained safely and securely tucked away as a rare breed. Only those odd balls, idiosyncratic enough to go out on a limb and to extraordinary measures, have pursued the acquisition and life spent in the company of this breed. They certainly have their quirks! Most of us who live with Azawakh can go on about the trickiness and travails of life with an Azawakh as much as we find everything about them endearing. We have all experienced a certain 'learning curve'.

When I first started in the breed, I was often asked - more times than I care to remember- "Why an Azawakh?" These were mostly Saluki people who couldn't seem to fathom why anyone would want a breed besides the one they themselves cherished.

Azawakh people know differently. We know the Azawakh is not for everyone. We know there is something special and magnificent about them, something you can't quite put your finger on that is just out of reach from words that define, shape, and qualify. There is something elusive and fleeting about them that no other breed has. That fleeting quality has stirred our emotions and captured our hearts! It is why those of us, already captivated by them, are so devoted to the breed.

It is my feeling that this quality has been mostly taken out of other breeds or seriously modified. This something that harkens back to the ancient, primitive and wild. An ancient partnership rather than one being master over another. Their self-possessed nature, with effortless grace and intricate intellect, put them somewhere at the crossroads between that of the wild jackal or wolf and the completely domesticated dog. The Azawakh gives the impression of remaining tantalizingly just beyond the sphere of complete domestication. Both fiercely independent and completely loyal, there is much about them that is both alluring and difficult.

Because of this quality, it is often the Azawakh who is sizing up the human at any new encounter. It is they who will decide about you and not vice versa. They are not impressed just because you are another human like the one they are devoted to. Being one of the same species doesn't automatically make you likable or trustworthy like 'their person' is. They will not grovel or lower themselves to gain your approval. On the contrary it is you, the new person who must show patience, self-confidence and a certain disinterest in 'saying hello' right away, that will bring out the curious nature of the Azawakh and have them warming to a new friendship.

It is this quality that most often seems to 'throw' a person new to the breed.

It is this quality that leads people to ask "why an Azawakh?"

And this is why an Azawakh is not for everyone.

These are traits most of us already having Azawakh have encountered in some form or another. Those of us living with them have adapted to them. It can be both frustrating at times and yet there is something there worth appreciating and those of us devoted to the breed truly admire these self-possessed, more primitive qualities, even as they may require a 'learning curve' to be able to handle them adeptly.

But a great many 'Westerners', Americans especially, expect their dogs to be 'friendly' and 'like' everyone. I don't know where this came from. (Is it because we ourselves wish we were friendlier and got on well with everyone we met, that we impose this on our dogs?)

These dogs that were there from ancient times to the present, to aide in the hunt and alert the camp to danger, would naturally be suspicious of the unfamiliar. By being hyper-sensitive to what stands out from the normal pattern, helps give a 'heads-up' to humans that benefit from this advanced warning. A dog that barks at strangers on it's territory was appreciated because people knew, someone's coming. Friend or foe? The Azawakh found across West Africa today, still perform this basic service. But it is us in the West whose needs have changed.

So, what role do they or should they play in the shaping of the future of this breed in America?

These traits, once beneficial, can pose more of a hurdle to a contemporary Westerner who may live in modern, semi-congested circumstances in the suburbs or cities where we need to interact around a lot of distractions with all kinds of people passing by and a number of other dogs all moving around the same area. Squirrels, plastic bags on the wind, bicycles… We want to pass by on the sidewalk, or go to the dog park or beach or hiking trail with our dogs and reasonably interact with other people and dogs out having a day of it too. More and more folks are noticing the beauty of the breed and want to take them up as show dogs. But what does standing for inspection at a conformation event have to do with their natural desire to run and chase things, or roam a wide territory, or alert to something in their environment? Whether as show dogs or pets or for some other performance event, it is vital to understand the working background of the breed shaped through the needs of traditional people through millennia. Often though, we simply want them to adapt to us immediately, and fit into our contemporary lives now.

There are those that would argue that needing a learning curve to handle this breed well, shouldn't be necessary. They should simply have friendlier, more easy-going temperaments that anyone can manage. I believe this to be incorrect and this is clearly changing the breed for Western preferences rather than preserving original, working traits that have endured for thousands of years.

Their balanced temperament, as it is, does not leave them unmanageable or unadaptable to modern circumstances. Rather, it is the people that will have to be better owners and truly educate themselves to be sensitive and aware of dog behavior in order to calmly and confidently guide their canines through training and socialization and take preemptive action, intervening in certain situations.

Perhaps if we look at these traits with an open mind and appreciate what a service they have been to their traditional people throughout the ages, we can find a balanced approach to sharing our lives in the modern, western world with these amazing creatures.

Finding a way forward by taking advantage of their natural instincts, putting these ancient traits into practice to preserve them for the future. As they gain wider recognition, more emphasis needs to be put on activities that challenge the intellect and athletic abilities of the breed. A wider audience among those with 'working/performance' interests could be developed. For those people interested in 'preservation,' what are we wanting to retain of that essential, elusive quality of spirit that the Azawakh possesses and what does 'preservation' fully encompass?

Is it even possible to keep and maintain a breed in a different time and place, under different circumstances without inevitably changing them? Without inevitably adapting them to suit our particular individual and/or contemporary needs?

It's been a relatively small group of us that have seen the Azawakh thus far into the western landscape. With AKC recognition on the horizon and growing interest from pet owners, it is those of us with a true passion and dedication to the breed that will have to help set out a path for the future of the Azawakh in America.

Posted by Marya Morales at 11:00 AM No comments:

The Azawakh Club of America

Promote Your Page Too